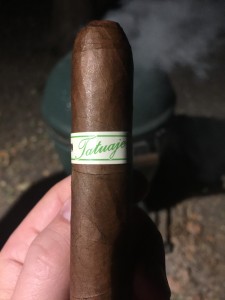 It’s October in Central Texas. For a good stretch of our friendship, Stephen’s introduced me to the joys of the horror genre (and subgenres), the spooky fun of Halloween, the weird intersection of the cozy fall season and sometimes sheer terror, gruesomeness, and legends. He’s also showed me one of my now-favorite short stories, “An Occurrence on Owl Creek Bridge,” a Twilight Zone-ish tale about a Civil War soldier’s execution and escape. Stephen also hosts a nightly Halloween movie special for each of the 31 days of the month. It’s a special time at Cigar & Whiskey.

So, last week, we set ourselves up for a cigar/grill/porch/dog night with our good friend, Pynes, who has a Big Green Egg, a wonderful family, and two rambunctious dogs. While setting up the grill, we lit up the Tatuaje Monster Series’ Jekyll, which came out in 2014. Stephen has aged these three Jekylls since last October, and Tatuaje releases the follow up cigar, the Mr. Hyde, this year. We will review the Mr. Hyde soon and see about how it reacts and follows up with the Jekyll, but for now, let’s talk about the nicer, kinder, gentler of the two cigars/literary characters.

We lit up. The first third surprised us, with a strange combination of cream and black peppercorn – almost like a potato soup. No bacon or cheese in this cigar, though. The peppercorn would transform into a spicier flavor. As we continued on, the dogs ran around and through our legs, wanting to be petted or thrown to. I engaged with the American Bulldog in a pretty intense fight over a rubber ball that he was pretty passionate about, and the boxer would come up, put his front legs up on the American Bulldog, and try to assist me. The cigar took a pretty good beating, and never went out. Was glad to see that it held up well. 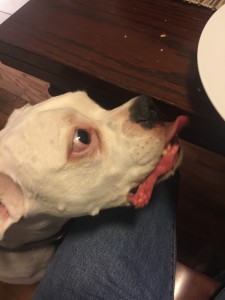 In the second third, the cream re-emerged with some light brown sugar flavors. Certainly the sweetest aspect of the flavor profile, I’m sure the cigar makers wanted to include these to indicate Dr. Jekyll’s amiable, kind personality. Smoke production stayed constant and plentiful, as you can see below. 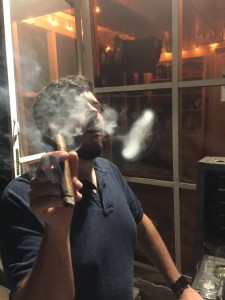 Soon, though, a coarser, leathery flavor took over, and even the spicy pepper from before melded with other flavors to become more muted. I love a hard cigar buzz, but the flavor was more powerful than the actual effects. I imagine that the Hyde will be much more powerful, potent, and unpredictable.

An unusual flavor, a mercurial flavor profile, with a hint of something more powerful to come – couldn’t ask for a more enjoyable cigar in the Halloween month. Check in soon with us when we confront the Mr. Hyde – we have no idea what is in store. Stay tuned!