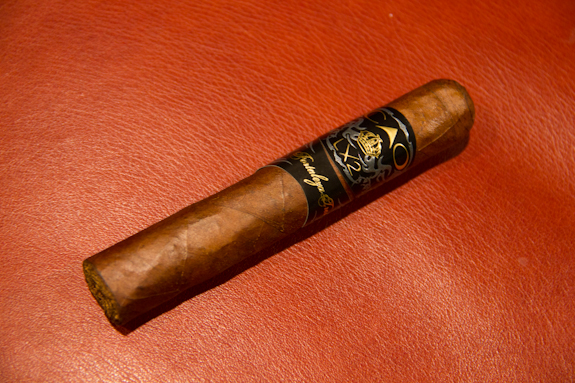 The CAO LX2 (which stands for “ligero times two”) prides itself on its potency. A hybrid across the board, the cigar sports Dominican and Nicaraguan longleaf filler, a Honduran binder leaf, and a relatively dark Nicaraguan wrapper. Like a custom computer or a built-for-speed automobile, the combination suggests a smoke with unique potential, maximizing for enjoyment and pulling together its disparate characteristics to create something better than its parts.

I had hoped this was the case for the CAO LX2. I’ve enjoyed different lines from CAO in the past, and the Brazilia “Gol!” cigar was one of my go-to favorites during my time in the humidor. I lit this CAO on the back porch with Stephen earlier this April.

The burn took a little adjusting. The fire wanted to canoe to one side, but that’s just a simple matter of turning the cigar the correct way. After some maintenance, the LX2 settled down. The first third tasted rich, woodsy, and with more than a generous helping of black pepper. There’s not a lot of spice in the LX2, otherwise – just a solid heft of flavor that floats along smoothly and without fuss. While still avoiding the canoeing issue, the second third transitioned into something toastier and sweeter. This is one of the cool things about smoking cigars: certain things are delicious that might sound odd if combined in actual ingredients for a meal. The second third sported a graham cracker-like crust or toast, but also had earthy and sweeter tones of wheat and hay. It’s a transporting aspect.

Unfortunately, the issues with the burn continued for the remainder of the cigar. By the final third, I was tending to the LX2 as much as I was noting its flavors and experience. The draw seemed quite tight, tighter than most cigars I’ve enjoyed, but the flavor remained worth it. After the woodsiness of the first third and golden wheat of the second, the finish seemed something like a chalky dark chocolate. Dry, almost powdery and bitter, but still delicious.

Remember the potency we’d expected at the beginning? Maybe I’m just a nicotine fiend, but this cigar did little to knock me over, such as, say, the Perdomo 20th might (which we will review next week). Still, the tastes were involving and out of the ordinary, the maintenance was not too big of an issue, and the price point on these remain reasonable from $6-8. Distributors in our area (Central Texas) are out at the moment, but pick the CAO LX2 up here if you need it sooner than later. Flavor-hounds, rejoice in this custom-built cigar.