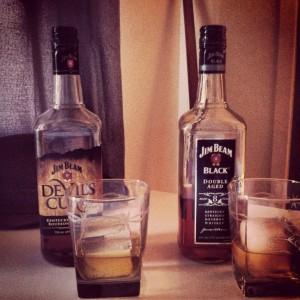 We picked these two bourbons because both have been on the rise, winning awards and accolades in the last few years since their debuts. In doing so, they’ve in some ways defied Jim Beam’s brand reputation as a reliable but relatively uncomplicated bourbon. We asked whether the hype was justified, and I wonder whether Jim Beam is headed into the boutique bourbon market space with these two products. Let’s dive in.

NEAT
We start with the Devil’s Cut. When smelling the glass, the slightly higher alcohol content is apparent. The nose is sharp. The glass sports the slightest red-orange tint, just a tiny warmer shade than golden brown. Sadly, even without an ice cube, this whiskey fussball trikots kaufen is just watery. You can catch some hints of maple and caramel, but they don’t infuse this bottle–instead, the better flavors just float around on top of the lightest woodsy base. The most distinguishing part of the Devil’s Cut is the after burn. If you like your bourbon a little spicier than normal, you’ll enjoy the fire on the tongue and gums when exhaling. It will last for an hour.

Though the Jim Beam Double-Aged Black shares the same color as the Devil’s cut, it smells twice as good. And if you could somehow make timber delicious, it would taste like this bottle–a strong current of oak runs throughout the whole sip. Its caramel flavor is vibrant, with more insouciance. Accentuating these two joyous flavors is a little brown sugar keeping things from getting too serious. The sweetness helps the whole sip and lingers on in the aftertaste. Robust.

ICE
I use a pretty large cube, which, based on my untrained eye, is roughly equal to 2 1/4 normal-sized cubes.

The best thing about the Devil’s Cut on the rocks is that it retains some salty pungency. The sharpness remains on the nose and in the after burn. But the wateriness I alluded to earlier cannot be avoided. The bottle is so weakened by some melted water that even its basketball trikots günstig hallmark fieriness is mitigated, removing the bourbon’s most impressive quality. I think that this bourbon would be a fine base for a cocktail, if it only had a couple of other elements to balance it out. If you like it slightly abrasive, stick with it neat and this is your drink.

Jim Beam Double-Aged Black oozes excellence with a slightly melted ice cube. The water opens up a little cinnamon, sprinkled atop the caramel that is so apparent with no water. Spice a serious spine keep the drink varied. At its best, this bourbon tastes like a salty caramel milkshake. A little smokiness can be detected, maybe freed up with the water from the replica uhren kaufen timber from before. Stephen even compared it to a peaty Scotch. Heavy, sweet, but not cloying. It’s a real delight that I’d recommend, in particular, for the upcoming holiday months thanks to its cinnamon and nutmeg components. No medicinal twang.

THE VERDICT
Obviously, the Double-Aged Black destroys the Devil’s Cut in the Beam battle. I had a little of both left over, and I opted to make a cocktail commemorating the end of the summer months–blueberries, basil, and lemonade. It was light, balanced and made for an excellent wrap-up to our bourbon battle. Perfection.