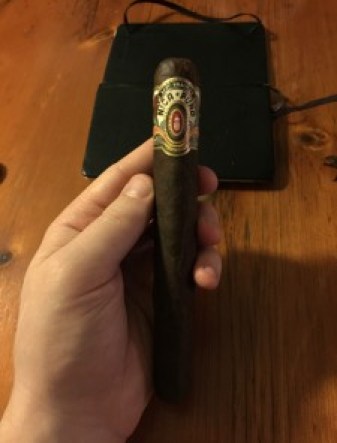 A couple of weeks ago, before the hard rains hit and Central Texas began filling up to its brim, Stephen and I visited SPEC’s in search of the CAO LX2. I’ve had that smoke before – it’s excellent, but it’s been discontinued in our area. Need to run through it one more time to write a thorough review. With the LX2 unavailable, I asked the humidorian for something new and fresh.

You gamble when you ask a salesman which cigar matches up with your taste, may or may not result in a transcendent experience, etc. As a fodboldtrøjer børn former humidor clerk, I was often instructed or incentivized to promote certain lines over others, regardless of quality. This is all in the game and makes it worth doing a little research before you hit the humidor. Since I entered SPEC’s on the fly, I did not do my research this time around.

The gentleman led me to the Alec Bradley Nica Puro Diamond Rough Cut, which I picked up promptly and took home. I love a good Nicaraguan, and the Diamond Rough Cut is a Nicaraguan on all three fronts: wrapper, binder, and filler. I thought the name “Diamond Rough Cut” alluded to the way the tobacco was arranged or cut. Instead, the cigar makers performed a box cut on this limited edition and squeezed it a little, giving the cigar a lopsided square shape. Or, a diamond, if you want to get picky about it. Either way – this seems lazy to me, and it’s not a great foundation on which to lay an entire line of cigars.

Don’t read any further if you’re picky about technique. My first cut on the cigar was a little small, so I tried to trim the edge to open it up and allow for a better draw. This works on regularly-rolled cigars. With the “diamond cut,” the trim unraveled a significant portion billige fodboldtrøjer of the bottom third. It’s possible this affected my draw. The cigar burned hot for the majority of the smoke, worsening as I got down to the last third. In turn, the heat affected the flavor profile and I could not pinpoint anything remarkable about the smoke. Even if the heat intensified during the process, I expected to be able to pick up some notes on the first third. Nah. Just tasted like burning wood.

I take full responsibility for my carelessness on that first cut. But my gut tells me that there were more issues intrinsic to the cigar. How, barring sickness or a brain injury, can you not taste a single interesting flavor on a smoke? Mainly, I overpaid for the Alec Bradley name, the “novelty” of the cut/squeezed trapezoid shape, and my own ignorance. Don’t make my mistake.