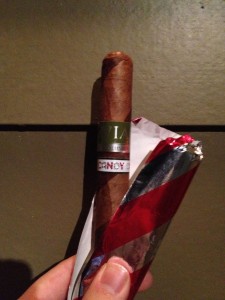 The Viaje Candy Cane is a limited holiday run that is extremely festive, including both foil candy-cane packaging and a barber pole wrap that is intended to invoke the image of its namesake. However, the person who sold me this stick let me know in no uncertain terms that it did not really taste like a candy cane at all. I am a Christmas nut, so there was no way I could pass this up, and since I don’t really even like peppermint that much, this warning came as a relief.

Unwrapping the Candy Cane is a treat as the foil pattern matches that of the cigar. The foot gave off a faint aroma of cedar and some pepper, but nothing too deep or complex. I went with a slightly angled cut and the cold draw kept the light pepper and hay. After voetbalschoenen nike toasting, the cigar initially proved itself quite peppery, though this settled down after the first few puffs. For just a moment at the start, I also got a touch of dark chocolate. After that, I was taken on one of the stranger cigar journeys that I have experienced.

Simply put, smoking this cigar is a lot like what I imagine eating Willy Wonka’s full dinner gum would taste like. I have described cigars as spicy before, where sweetness was nonexistent, but the first 2/3 of this stick was just incredibly savory. Smoke was relatively light, but it coats your mouth like yellow gravy. The pepper continues, but nowhere near as much. It was meaty, something I have never tasted before in a cigar.

The last third transitions rather suddenly (and appropriately) to a sweeter profile. It was a light, buttery flavor, something akin to a sugar cookie without icing. The smoke remained a little light throughout, and for the entire last third I wrestled with the voetbalschoenen sale stogie as the burn became more and more uneven. Further, this cigar began to get extremely tarry, and after a while the draw became so tight that it actually went out, requiring a relight.

So what are my overall thoughts? This was an interesting experience and a beautiful stick, but personally speaking I was not a huge fan of the flavor profile. That being said, I prefer my cigars very rich and sweet, so someone who appreciates a savory smoke is gonna love this one, particularly because it basically redefined what “savory” meant in a cigar to me.