What’s the best kind of weather for smoking a cigar? My ideal factors would involve the following: a crisp 45 degrees outside, reclining by a large fire, and winding down with a Weller’s after a sustaining, wintery meal. It’s reaching triple digits on regular basis in the Texas summer, though, so we lived out the next best ideal: in a shaded pool with a glass of rum.

I’d bought four La Flor Dominicana Ligeros for a trip to Houston, where I’d planned to grill out and relax. It is a particular kind of blessing when everyone else shows up with enough cigars for your crew, and then some. So I saved the Ligeros for a good day, like this one. Steven poured out some Ron Zacapa 23 (review to come) into glasses for me, him and our friend TJ. It was the middle of the day and the sun was beating the ever-living hell out of us. We found some refuge under a cabana that overhung the pool and lit up with a regular red Bic (sacrilege, I know).

The power of this cigar, combined with the scorching heat and cold rum, put me in an ideal state of lower consciousness. You feel the hit immediately with a LFD Ligero. The flavor is robust but even. It’s an unassuming, straightforward smoke. Binder and filler leaves are, as you might surmise, Dominican, but the wrapper is an Ecuadorian Sumatra Maduro.

Easy to light, and easy to stay lit – TJ got up to get something from the apartment for about 15 minutes and left his cigar there, smoldering. When he came back he was able to puff it again easily. When you’re at the pool, you need ease of use when smoking – you might be grilling, splashing, or otherwise being a summer degenerate. The LFD Ligero is that perfect kind of smoke. Out of the three of us, there were no lighting or construction issues whatsoever, making it easy to philosophize and screw around in the pool. I recommend the LFD for an outdoors smoke for this reason – its hardiness would do you well on a walk through the woods, at a windy beach, or on a saltlicked boat somewhere.

This LFD experience lasted a good 45 minutes with the robusto size. At a price point of about $7/each, you’d be remiss not to end a summer with a pack of these to enjoy with friends. Find a body of water, get in it, have a cool drink to accompany, and light up. Let us know what you think! 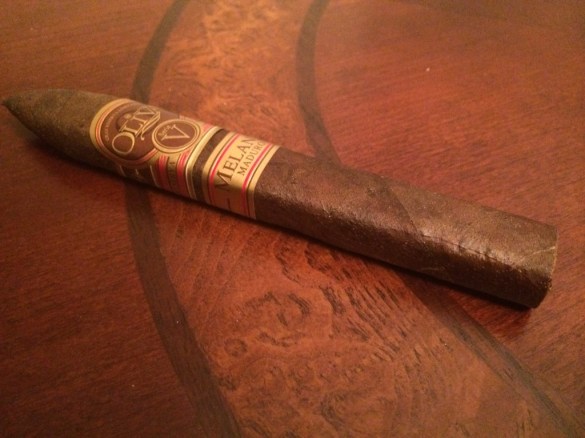 The Oliva Serie V Melanio was one of the most hotly anticipated releases of last year. Though it did receive an initially lukewarm reaction it has cemented itself as a fine example of a high-quality, regular release stick. I have personally sampled several of these cigars and have enjoyed them, though they didn’t quite blow my mind in the way I would have hoped. Still, as a big fan of Maduro cigars in general, 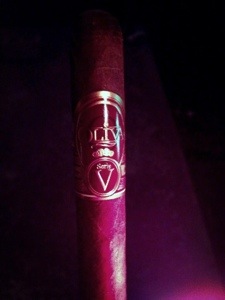 So, if you’ve been following this blog for a while you’ll know that I am a fan of limited edition cigars. Call it what you will, but I suppose I enjoy the spirit of the hunt and when I find something hard to find I pounce. So it was that in early January I stumbled upon half a box of the Oliva Serie V Maduros, a limited annual release. I bought what I could, eagerly brought them home…and promptly forgot about them until now. Still, I when I rediscovered them in the back of my humidor I knew that now was as good a time as any to light one up!

The cigar is very attractive, and I would expect no less from this much loved Oliva line. The cigar has a firm pack and a chocolatey brown wrapper with no discernible veins. The band looks very similar to the regular Serie V, which is all good as far as I’m concerned. The Serie V Maduro cuts easily and gives off a tasty earth and brownie aroma from the foot. Prelight draw is perfect with just the right amount of resistance.

The first light immediately offers some black pepper similar to what you might find in a Liga Privada No. 9. This is maintained, though lessens almost immediately as some cedar appears. The cedar deepens throughout the third until it transforms into a rich, deep earthy flavor. That earth and black pepper continues until the earth initially becomes more sweet until it billige fotballdrakter breaks and becomes far more flavorful, approaching something like a ripe plum. I thought this would carry until the second third but was surprised as, with just a few minutes left in the first, I get some dry cocoa, something floral like rose water, and a well-worn leather flavor. It tastes like an older bowling bag smells, minus the sweat.

The second third finally begins, but many of the complex flavors drop off quickly as the cocoa becomes a darker German chocolate complete with a characteristic bitterness and a finish like black cherries. The black pepper softens into white pepper, adding a soft spice to the chocolate. This continues throughout the second and into the last third.

The final third, as mentioned, keeps the pepper and chocolate. There is not much left to report, until the cigar gets a bit warmer with about fifteen minutes to go. Sometimes this is unpleasant, but in this case it causes a transition to a toasty campfire flavor. With just five minutes to go the cigar requires a relight, which doesn’t change the flavors but makes everything taste a fotballdrakter bit more fresh. With that, the cigar concludes.

Aside from the minor issue towards the end, the cigar was very rich, complex and enjoyable. There was just the right amount of smoke production which is substantial but not overt. This was an incredibly enjoyable cigar, so if you come across any I highly recommend you pick some up!