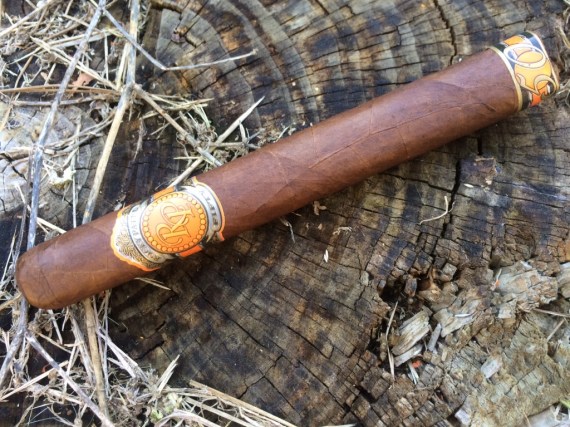 Let me come right out and say this: I have had mixed feelings about Rocky Patel cigars almost since I started smoking.

That is not to say that I haven’t enjoyed some of their cigars, but I had not discovered anything that blew me away. I also experienced a fairly significant amount of inconsistency in construction and performance that have sort of steered me away from the brand despite it’s popularity.

I say all this because when I was told by a trusted source that the Rocky Patel 50th Anniversary was a spectacular cigar (in his words, “one of the best cigars I’ve ever had”) I was a bit skeptical. Nevertheless, I filed the information away, and a few weeks later billige fotballsko Nike when I saw a box of 50th Anniversary cigars at a local vendor I picked one up despite the slightly exorbitant price tag ($20.00 in my case).

The cigar itself is, admittedly, pretty regal. The wrapper is appropriately thick with just a hint of tooth that gives it a pleasantly rough feel like stingray boots. The color is uniform and the wrap is perfect with only a few pronounced veins and tight construction. The band is attractive, if a bit garish for my taste, with a bold “RP” inscribed on an orange bed surrounded by a simulacra of round diamonds. If you are looking for something that will announce your stick from across the room, this is the band for you.

Pre-light I got notes of oak and dried cherries. First light revealed these to be the dominant flavors, and they continued to mingle throughout the billige fotballsko på nett på first third. They were lightly interspersed with sweet notes, though they were fleeting and difficult to pinpoint. Think sparks of vanilla.

The second third gradually slacked off the sweetness to present the woodsy flavors in full force. These were highlighted by a gradually growing white pepper flavor that added a counterbalance to the majesty of the oak. Towards the end of the second I got a taste of leather.

That leather taste grew to rival the wood in the final third, adding back in a sort of deep, fruity sweetness like aged dates. These chaussure de foot Nike pas cher actually became a bit tart towards the finish of the stick, like the dates had been given a light coat of blackberry jam. It was a luxurious flavor.

Throughout the smoking experience the cigar performed very well, with no burn issues to speak of. Smoke production was medium-heavy and overall very complimentary to the aesthetics of the cigar.

I was impressed with the Rocky Patel 50th Anniversary, to the point that I will probably have to reintroduce Patel sticks into my lineup. That being said, I don’t think that they are quite worth the price I paid. Pick one up if you get the chance because this is indeed an excellent cigar, and increasingly hard to find this far out from its release.