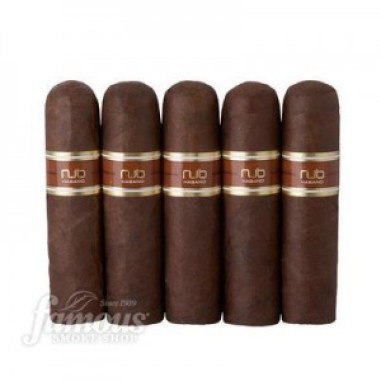 It’s spring in Austin with a high of 73. That means barbecues, crawfish boils and me spending a little more time on the porch. I don’t want to belabor the point when I know a lot of you poor, Eastern Seaboard bastards are stuck with the Winter That May Never End, but the late March weather in Central Texas offers up a lot of optimism, cedar allergies and the feeling of something new.

This isn’t a new cigar for me, though. I’d been reminded of the Oliva Nubs by my friend, in the midst of discussing old standbys that we’ve enjoyed from the past. When I worked in a humidor, these Rothschilds were popular with the country club and lakeside retiree set. The Rothschild offers the pleasure of a quick, powerful smoke, with minimal fuss and need to maintain. I can see how the Oliva Nub would be ideal for the golf course or on the breezy dock.

You don’t have to be Mr. or Mrs. Moneybags to enjoy this cigar, though. Me, I’m just smoking it on my modest porch. I bought two for $6.70 each and I think it may be my go-to this season for a writing cigar.

The Habano #358, at least, is a potent smoke with a ton of smoke production. If you’re trying to blow smoke rings or want to teach a fellow smoker how, this may be the one for you. I split the gap between the lighter Connecticut wrapper and the Maduro, opting for the #358, thinking that it might be representative of the line as whole. It’s not too complex or fancy, and the flavor doesn’t change much as it’s only about a third the size of, say, a Churchill. It’s got some bold Nicaraguan filler that is woodsy and powerful, but lacks the fire or spice of a standard Padron or equivalent. Smoke time lasted about 25 minutes, but that could probably be shortened if you’re in a hurry.

I paired the Habano #358 with a Cuvee Coffee Black & Blue Nitrogenated Cold Brew, which added just a little sweetness to the smoke.