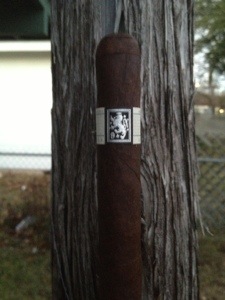 The Liga Privada line from Drew Estate is fast becoming one of the most hotly sought after brands in the cigar world. That, compared with a persistent shortage of the Connecticut Broadleaf used in these cigars, means that when you get a chance to buy some, you do it if at all possible. And my friends, that is exactly what I did. The immediate purchase was, I will admit, due to the reputation and because I am a sucker for hard to find sticks. However, when it came time to choose my first smoke of 2013, the looks and aroma from the Liga No. 9 singled it out from all the rest of the cigars in my humidor.

And what looks they are! Even if you are not traditionally a Maduro fan, the aesthetics of this cigar are amazing. A thick, dark wrapper hints at the complexity and depth that you can expect from the flavors in this stick. The band, though simple, really jumps out due to the simplicity of the Liga Privada emblem contrasted on a predominant white background. The typography on the label looks like handwriting, as though this were a personal blend being shared directly with you, that is actually quite appropriate. The aroma coming off of this stick is palpable and fantastic. Rich scents of moist earth and wood add a gravitas to the stick which boldly states, “do not take me lightly.”

Mouth watering, I gave this stick a traditional cut so I could get as much smoke on the draw as possible. The cold draw was perfectly firm without being difficult, and offered up similar earthy scents to those I got off the foot. Lighting the cigar was simple even with my soft flame lighter, and I was glad of it, as many of the thicker Maduro wrappers make you work at toasting them. Once the foot glowed evenly, I was ready to begin smoking.

The very first puffs I took off the No. 9 were just as rich as the aroma from the foot and the cold draw suggested. However, instead of earth I was treated with incredible dark chocolate and a little bit of black pepper. The pepper immediately died down though, and the  smoke became smooth and lush. I could tell there was a little more hiding beneath the chocolate, and the retrohale proved me correct, revealing a subtle almond flavor that blended very nicely with the existing taste. I should also add at this point that the smoke on this stick is incredibly substantial. The foot on the cigar produces a billowing cloud even if you are not actively puffing. I love this, and don’t mind it even when smoking indoors, but I could see this being an issue for some. If you have anyone around you who particularly doesn’t like smoking, either hold off on this one or tell them to clear off.

The second third of the cigar kept the chocolate, though it dialed down to more of a milk billiga cykelbyxor chocolate flavor that allowed for a diversity of flavors to shine through. The almond revealed itself in earnest, as did tastes of nougat. When I really slowed down and paid attention, I also got some sweetened condensed milk. The retrohale at this point didnt give me much more than the regular draw, but again made the almond flavor more distinct.

The final third of the Liga Privada No. 9 finally did away with the predominant taste of chocolate, keeping only a little of that and some of the condensed milk, which gradually turned into cream. Taking the place of the chocolate was a black coffee flavor reminiscent of a fresh ground Sumatran roast. The layering of the flavors at this point was very interesting, for while cream was present, and coffee was present, it never tasted like coffee and cream. Instead, they remained distinct. This levně cyklodresy lingered for the majority of the remainder of the cigar, though on the last five or six draws everything finally coalesced into a thick maple syrup flavor.

Construction on this stick was impeccable, as it featured a razor sharp burn and consistent draw throughout. It never got warm until the nub, though at that point I was basically holding it with tweezers so that was inevitable. The Liga Privada No. 9 is unashamedly full-bodied, yet for all the depth of flavor it didn’t come close to putting me out of commission. I have smoked many less complex Maduros with more of an unnecessary nicotine kick. With the Liga  Privada, you’ll almost certainly get a buzz, but its not overcompensating for anything.

Overall this is one of those hard to find sticks that truly lives up to the hype. I want to tell you not to buy them, but only because I am worried you’ll get at them before I can. This is a stick that commands your attention (and that of anyone anywhere around you, for sure). When you can find them, grab as many as you can, because these smokes are worth it.

Recommended: Yes (but stay away from them, they’re mine!)