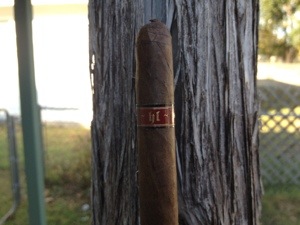 My background with the lancero vitola is one of suspicion. I entered the cigar world with several preconceived notions, none of them particularly well-founded. One of those dealt with the relationship between ring gauge and power of a cigar. It sounds ridiculous to say, but I believed that larger cigars were somehow more legitimate. Over time, I came to understand that in reality larger ring-gauge cigars are often less flavorful, encounter burn issues with greater frequency and just perform poorer in general to their smaller ring-gauge counterparts.

Still, I had myself convinced that I wouldn’t like the lancero size. I attribute this in part to a misguided belief that the vitola was gimmicky: no true cigar was that small, it being a counterpart for extremists on the opposite end of the spectrum from the 60+ ring gauge behemoths. I also identified them with cigarettes, which I personally hold some aversion to (though nothing against those who do enjoy them). So, when I first encountered the, I felt a conflict fotbollsskor webshop of emotion. Here was a vitola that I had villainized in my own mind, yet I was attracted to the stick. I can attribute this in some small way to my penchant to pick up sticks that I think look particularly attractive, but there was something else as well. Call it a hunch.

Make no mistake, this is a very attractive stick. A mottled, dark brown wrapper suggests age and complexity despite (or perhaps because of) a somewhat rough texture. The band is bold yet classy, with abbreviated gold lettering on a field of black and red. Like all Illusione sticks, the effect stops just short of understatement and inspires a desire to explore further. Also like all Illusione sticks, the smell coming off this one is very enticing. It is chocolate and earth, a combination that is always promising in a maduro. The pack is firm, with very little give and no inconsistencies. There are some noticeable veins, but nothing which takes away from the attractiveness of the stick. After cutting, The cold draw offers the same chocolate and earth flavors as the aroma, but definitely trends toward the chocolate.

The first light offers notes of sweet hay and nuts which deepen as you get into the first third. There is also a small amount of leather, though it is billige fotballsko Nike downplayed in comparison to the other flavors. The retrohale gives more of the same, though it does so without any unpleasant heat, which to my mind is quite an accomplishment. Further, I am impressed with the smoke production, which is quite substantial even in the windy conditions in which I am smoking.

As I graduate to the second third, the leather condenses into a tasty milk chocolate flavor which keeps the nuts and blends the two for a smooth, rich smoke that lingers on the palate. This produces the interesting effect of moistening, rather than drying the mouth. I did not feel as though I required the water I brought out to pair with this stick at all. The strength of the stick also ramps up a bit here, and by the end of the second third I definitely have a slight buzz, though nothing unmanageable.

The final third follows the logical progression of the stick, providing a thick dark chocolate flavor which takes over from the milk chocolate and nut. Though it is difficult to discern more subtle flavors from the draw at this point, the retrohale offers a slight layer of black pepper to the dark chocolate. The effect works nicely and I highly recommend that you do this if you are partial to the retrohale technique, because the pepper continues to linger and provide balance to the sweetness. Strength remains steady at the medium-full present in the second third, which is great if you find yourself getting light-headed from an unexpected nicotine kick. As for me, I nub the hell out of this stick with great satisfaction.

I was incredibly pleased with the flavors of the stick, and the construction was equally impressive. Lighting was effortless and burn remained consistently sharp throughout my the smoke. The cigar also remained cool, allowing me to fully appreciate all of billige fotballsko på nett på the rich flavors present in the cigar, correcting yet another misconception of mine that lanceros would produce a hot, thin smoke. Draw was great to the finish, offering just the perfect amount of resistance.

The Illusione Holy Lance Maduro was both a treat and an education. After smoking this stick, I view the lancero in a completely different light, transforming it from a vitola I attempted to avoid to one that I will specifically seek out in the future. This was also a great example of a well-blended stick that showcases the benefit of smooth and expected transitions. Was I surprised by any of the flavors as the stick progressed? Not really. But that didn’t take away from the complexity of the smoke, and besides, when it tastes this good who wants anything else? The Illusione Holy Lance Maduro is yet another excellent offering from Illusione, and a stick you should definitely enjoy for yourself.