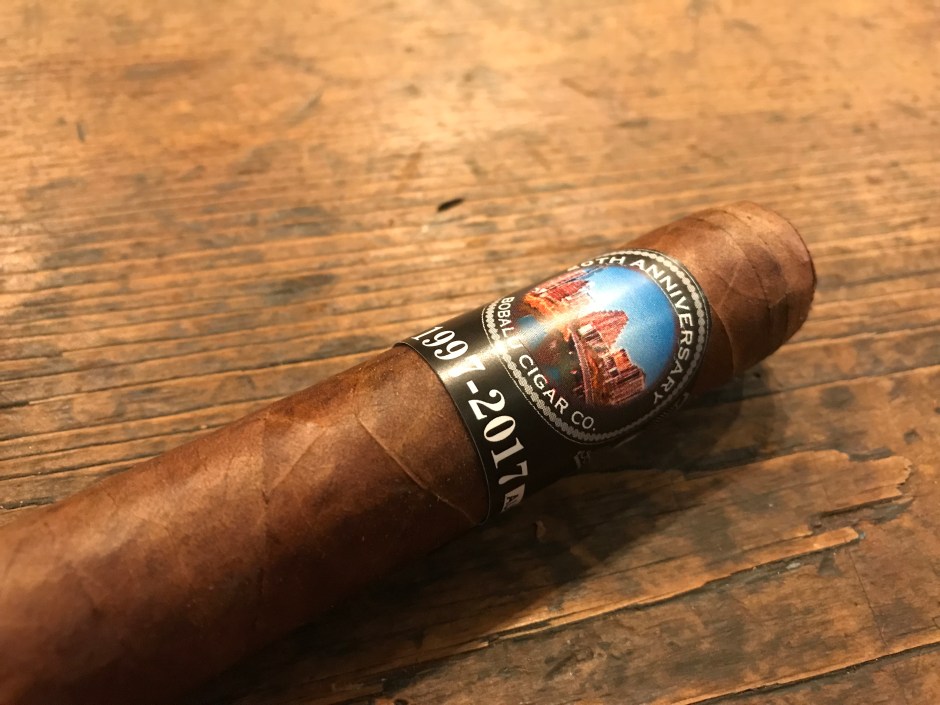 We’ve mentioned before but it’s worth reiterating: Bobalu cigars will always remain near and dear to my heart. That’s because they were the first cigars that I ever really loved, and they really opened my eyes to the flavor possibilities that premium cigars could hold.

To commemorate years of handmaking cigars, they recently released a special edition 20th Anniversary Tribute cigar. It is a dark-wrapped stick with smooth seams and a very slightly toothy texture. It’s band features the city of Austin skyline, referencing the downtown location that has served as home base for Bobalu and its core of dedicated fans. After I’d admired my hometown depiction long enough, I gave it a cut and started toasting.

I’ol admit, I was a little nervous on this one. I have sometimes encountered construction issues with Bobalu cigars (in the distant past, and infrequently), and I really did not want that to be the case here. I am pleased to report that it was not. The initial draws offered the perfect amount of resistance, and it burned evenly throughout the entire smoke. Flavor-wise, the first third offered nutty pecan flavors and toast. Very subtle sweetness from the pecan meant that the smoke was not at all cloying, nor was it particularly rich. However, it was deep and very enjoyable.

The second third saw a subtle shift in the flavor, with the pecan and toast becoming more woodsy, almost oaky, though never quite touching that kind of campfire smoke taste. There was a touch of cinnamon here as well, along with a hint of paprika. Regardless, none of these flavor popped, but maintained that very gradual shift into focus.

The final third maintained the theme of “smooth transitions”, though this time even more subtle, and nothing lingered long. For a few moments I’d detect some significant dark caramel flavors, almost burnt. Then they would dissappear and return to the woodsy flavors I’d been enjoying. It was an interesting experience, just as the cigar would shift into the background of conversation then it would smoothly pull focus again.

This cigar is worth seeking out, certainly if (as I’d imagine is the case for most of my readers) you haven’t tried a Bobalu cigar before. However, if you are already a Bobalu fan, this is a must try and a worthy tribute to the brand. A very interesting cigar that, for me, reminded me why I fell in love with stories in the first place.