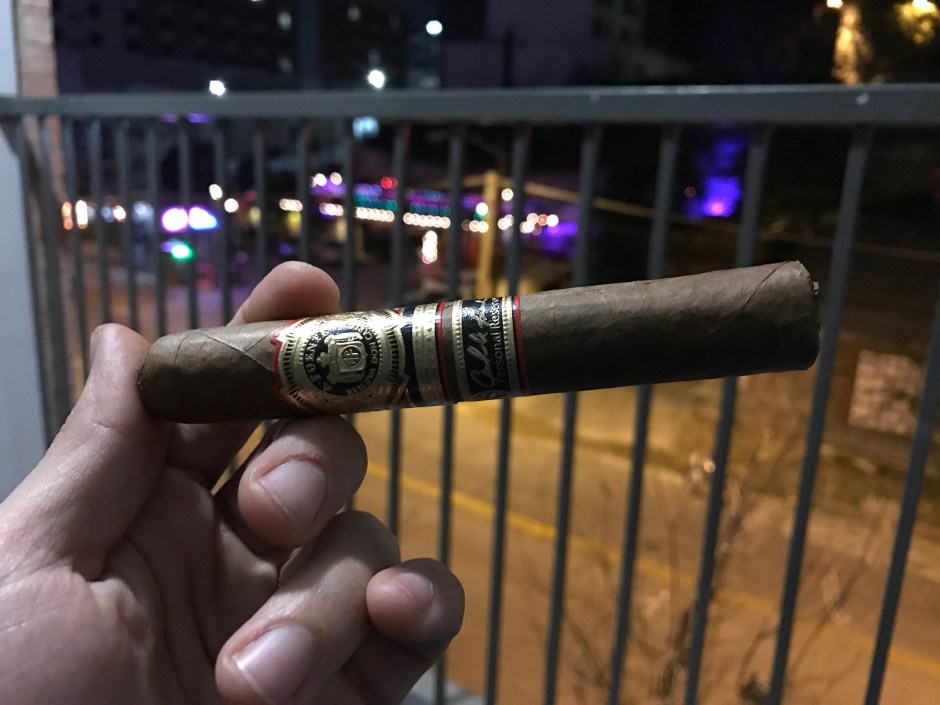 It’s no secret that Arturo Fuente makes some damned fine cigars. Many of his lines, including the famed Añejo and Opus X, rank among my personal favorites. So, when I discovered the Don Carlos personal reserve I knew I’d be in for a real treat.

The packaging on this cigar is handsome, very classic Fuente styling with just enough gold to exude class without being gauche. The cigar is also beautifully wrapped, with flawless construction aesthetically speaking. I gave it a classic cut and toasted it slowly with a soft flame lighter. This was a stick worth paying extra attention to.

The first few puffs gave me a combination of leather and black pepper. The pepper pops waned and (excuse the metaphor) it began to feel as though I was sinking into a well worn recliner. The strength was perfectly balanced and highly conducive to lounging. Call this a stress relief cigar. The smoke production was also impressive, nothing too strong but enough to feel substantial and give a very creamy mouthfeel.

The second third saw the leather flavor deepen into a slightly caramelized simple syrup. Rich and deep. The cigar was burning razor straight and was cool to the touch at this point. The value of construction is definitely not just aesthetic here.

The final third brought an even deeper syrupy flavor and an increase in strength. Each puff felt and tasted like molasses dripping off the tongue. However, it never became too cloying. This was a CIGAR, and a very subtle woodsy note did begin to permeate the smoke during the final third.

If I had to describe this cigar in a word, it would be “balance”. Each puff feels complete, and though its not quite as attention grabbing as some of the smokes I’ve tried, it’s one that commands your respect. In the same way that your mind begins to wander to wondrous places even while you enjoy the sensation of a good massage, this cigar is conducive to whiling away an hour or so in near complete relaxation.