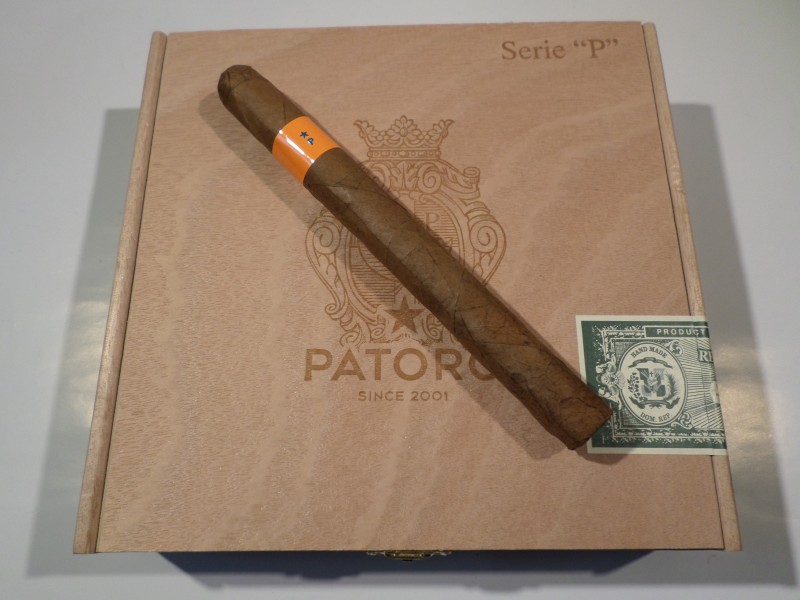 Stephen lit up a Patoro Churchill the other night during a poker game. I have to admit that it stank. Stank like I’ve never smelled stank before from a cigar. Wet-dog-smell stank. Ol’ Steve had put in some new Boveda packs into his coolidor, and while the packs tend to even out over about a week’s time or so, it sometime takes a while for the humidity to level out. This was a new cigar, too, and it may have been wet from the store to begin with.

Either way, Stephen got me a Patoro Churchill for my birthday, as well, so I can’t wet-dog on him too much. Mine “felt” like it was at a good temperature – neither spongy and full of humidity nor dry and crisp like kindle. The Patoro Serie P is a relatively new line with Dominican fillings and bindings, but with a Brazilian wrapper. This turned out to be my first Brazilian-wrapped cigar since I smoked the CAO Brazilia Gol in 2011.

Immediately, I knew that I’d gotten a Patoro in better condition than Stephen’s. The cigar lit with ease, the smoke production was immediate, with an easy and graceful draw.

The first notes kicked off with chocolate, cream, and a little char. This lasted for about 20 minutes or so, and soon it turned into a mellow, low-key flavor profile. Many cigars don’t follow the rule of thirds, in which the flavor changes up over the course of the experience. While the smoke was tasty (and not reminiscent of an old, mossy children’s pool, as Stephen’s smelled), it was mellow and low-key to the point of blandness. The flavor never changed afterwards. I don’t want to down on this cigar – it required no maintenance at all and let me talk on the porch without having to pay too much attention to it. But the Patoro never really grabbed my attention in the first place. Still, a birthday cigar is a birthday cigar, and it was a perfect choice for an easy, relaxed, run-of-the-mill night.

At $12 a stick, the Patoro might be a little too pricey for an everyday or regular smoke. And I can’t recommend it on a special occasion, since there are plenty of other cigars at that price point that would offer a little more variety and excitement. Still, if the box was uneven, perhaps Stephen and I both missed a delicious one. Looking forward to trying it again.