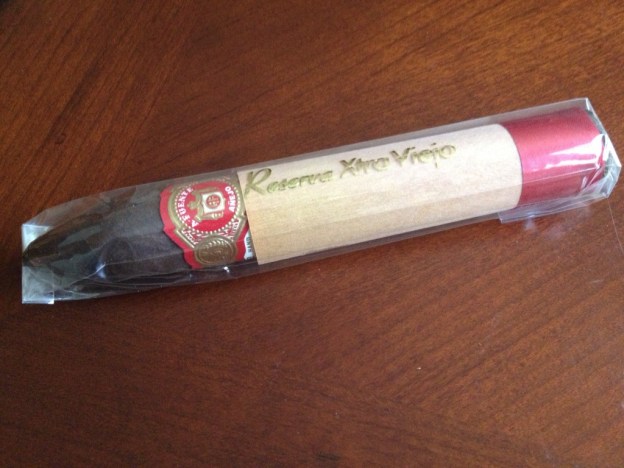 Arturo Fuente produces many of the quintessential “hard to find” cigars that get snatched up almost as soon as they are released. Most popular among these is the storied Opus X line. However, only slightly less well known is the Anejo line. The Arturo Fuente Reserva Anejo cigars use the same fillers as the Opus X, but feature a Connecticut broadleaf wrapper that is aged for a full year in charred oak cognac barrels. I personally have a special bit of fondness for see sticks, because in my cigar journeys they were the first elusive cigar that I was actually able to add to my collection.

This review focuses on the Arturo Fuente Anejo no. 55, a beautiful 6×55 torpedo. This cigar gives off a very distinctive initial goedkope voetbalshirts aroma, like an earthy wine cellar. These cigars also have an excellent consistency, not a tight pack but perfectly springy. In contrast to their Opus X brethren, the band on these smokes is understated, using a basic Fuente design. That can actually make these difficult to spot at a glance in your B&M. Check carefully if you’re on the hunt!

The Anejo cuts and lights easily. Even before the first draw, smoke production is admirable. Not quite on par with a true smokestack (like the Liga Privada), but still voluminous. First third basketbal kleding kopen is pure elegance. There is lots of wood and spice which melts into a deep flavors of, what else, cognac. Unline many aging gimmicks, the barrels that the Anejo are aged in define this stick from beginning to end.

The second third sees the cognac brighten noticeably, transitioning into a deep red wine complete with pleasant tannin characteristics. The retrohale magnifies this profile, bringing the red wine almost completely to the forefront. Though I paired this with The Glenlivet, I actually wish I would’ve gone with an aged Cabernet, because I believe the synergy would’ve been incredible.

The final third mingles the distinctive cognac and wine flavors of the first and second thirds. The wood also shifts subtly, adding brief bursts of exotic spice. This portion of the cigar tastes like a fresh cut cherrywood plank varnished with wine. The only word here is beautiful, almost feminine in the way the spices play with you.

This cigar is an absolute delight, and stays strong the entire way through. It easily holds its own alongside its more popular Opus X brother, and is in many ways more alluring. This is an easy recommendation, a cigar that deserves to be actively sought out.

We recently ran a contest on our Facebook page to get some funny cigar stories from our fans. We got some great laughs out of all of them, but in the end we had to choose one. For overall absurdity (and hand-rolled cigar goodness!) here is our pick:

“About two years ago my wife and I were visiting her family in Puerto Rico and decided to spend the day in Old San Juan, which was about an hour and a half away. One of her many sisters decided to go with us. At about 10:00am we were in a plaza and I Imitazioni orologi italia noticed there were two gentlemen rolling cigars under a tent. I went over to meet and talk cigars with them. Turns out one of them, a torcedor, owned a tobacco farm in PR. He offered me a freshly rolled cigar and it was full bodied and quite good. They were surprised that a gringo could speak fluent Spanish with them. My wife and sister found me and said they were going shopping while I stayed with my two new friends. The owner asked if I would like to go with him to visit his farm and I said I would. I asked the other gentlemen if when my wife came looking for me to tell her I would meet her back at the tent at 4:00pm. We ended up staying at the farm until about 5:30pm. When my wife came looking for me at the tent, the gentleman who had been there had left and another was in his place. He had no idea what my wife was talking about. My wife panicked and alerted local law enforcement that I had been missing since that morning. I returned to the plaza around 6:00, my wife and sister were there giving a statement to the police. When she saw me she got so pissed and embarrassed having called them. I thought it was funny and started laughing. She literally didn’t speak to me for two days. She thinks it’s funny now but she didn’t at the time.”

Congratulations Jack Davis, you win a free smoke for letting us have a laugh at your story!

We also have another winner, chosen from those who shared our status to spread the word. That winner is…Rob Bare!

If you two gentleman will send us a message on Facebook with your shipping info we’ll get your smokes to you. Thanks for playing everyone and check in soon for the next Facebook contest!